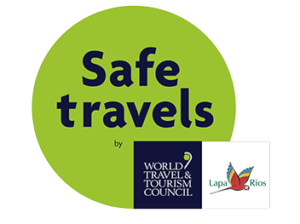 • Pacuare Lodge and Lapa Rios are Lodges that were conceptualized as vehicles for greater goals: conservation of unique, valuable natural areas that are the most emblematic natural corridors in Central America. These areas are facing the pressure of population growth, poverty in surrounding communities and lack of environmental education in order to peacefully co-exist with the Wildlife.

• The biodiversity protected by these areas is crucial, since it is currently a natural bridge for species to move from Atlantic coast to Pacific coast ecosystems. Between the 2 Lodges the company is directly protecting 750 hectars (1,875 acres) of pristine rainforest.

• The case of Lapa Rios shows this reality in a very clear way. The company started over 25 years ago on a piece of land of 400 hectars (aprox. 1000 acres). At that moment it was evident that the local communities were hunting for wild species at much faster rates tan their natural regeneration; there was intense logging and deforestation, and ilegal mining was still observed.

• There was a clear need for:

• Increasing environmental education. A program was set up to develop a school in the local community of Carbonera, which is now part of the Public School system.

• Monitoring the health of wildlife species. An agreement was reached and research students from several Universities have conducted studies at the Lapa Rios reserve, leading to understand the status of certain species such as peccaries, Jaguars and Tapirs.

• Providing many more job opportunities for the local communities nearby the reserve, who were basically subsisting on invasive cattle farming and hunting the Wildlife. The Lodge has grown to 17 rooms, targeting high-end educated clientele who value service and detail, allowing it to grow the number of direct hired staff. Currently the Lodge directly employs 75 community members, and indirectly an estimated of 200 hundred people.

• As a result, very specific results are observed in the general area protected by Lapa Rios

• Scientists have identified a total of 8 Jaguars roaming in the reserve.

• Other species have been clearly identified in the area, including the other 5 species of wild cats present in Costa Rica (Jaguarundi, Ocelot, Margay, Puma, Oncilla).

• The Lapa Rios Naturalist Guide School: a center was created where young members of the community find a practical opportunity to learn guiding techniques and knowledge. With the job opportunities that Lapa Rios and other ecolodges in the area create, rather than migrating from the local community, these young people perform estimulating Jobs in their hometown.

• Despite the achievements, the threats faced by natural areas remain:

• Gold mining in the basins of rivers continues, bringing along with it the problems of erosion and hunting.

• More cameras are needed in order to monitor much larger natural areas. The more understanding of wildlife behaviour and movement, the less conflicts there will be between human beings and wildlife species.

• Human population growth also poses a pressure for increasing land devoted to agriculture as opposed to conservation of natural habitats.

• More children need constant environmental education in order to be aware and become creative at new forms of conservation in the future.

Specific Projects to be supported by Lapa Rios

• Replicating the Jaguar Conservation Effort in the Corcovado National Park area and its influence regions.

• Financing a number of office clerks at the Park Ranger headquarters. Currently there are Park Rangers carrying out administrative tasks as opposed to remaining in the field for patrolling purposes. This has allowed for the threatening human activities to find grounds for execution with Little opposition.

• Recycling Center in Puerto Jiménez: a Project to support both women enterpreneurship and the reduction of waste in the local communities.

• Future Lab Station: we intend to develop a research station within the property in the near future. This would include hosting interns from universities for research purposes; keeping collections of species samples from the forest; documentation of wildlife behaviour, etc.