A NEW GUIDES SCHOOL IS BORN AT LAPA RIOS

A forest left standing is more valuable than one cut down. This mission statement of Lapa Rios Lodge explains the soul and drive behind its sustainability efforts for nearly two decades. While nature conservation takes a huge chunk of the sustainability pie, the lodge focuses on its social aspect as well, hiring only local staff from the immediate community (currently employing about 50 people).

From the very beginning, in fact, Lapa Rios was meant to generate income for as many members of the community as possible. The preference was always placed on hiring local staff and training on the job rather than “importing” more experienced staff from other parts of the country.

The staff training process at Lapa Rios is a serious affair; it can take from several weeks to two months. Typically, the locals without any experience or prior training start in one of the “lower rung” departments, such as housekeeping or maintenance. If after a while they express interest in learning more and moving up, they are given an opportunity to train with the team of their choice and eventually, when a spot opens up, switch teams. 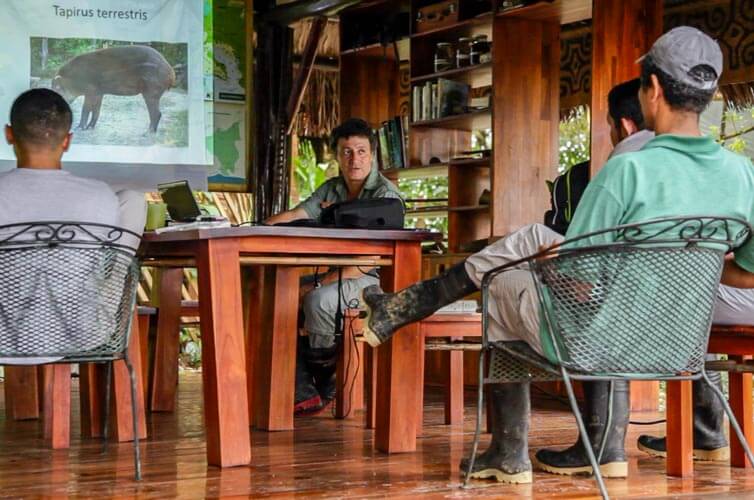 Even though Lapa Rios has a solid team with low turnover, it has happened on several occasions that they were forced to hire outside of the community (though always from within Costa Rica). That is mostly because for positions that require prior knowledge or experience, it is difficult to find an immediate replacement from the local community, especially so where naturalist guides are concerned. On the other hand, the best guides the lodge has had grew up locally. The living proof are Edwin Villarreal and Danilo Alvarez, two guides who started working at Lapa Rios over 20 years ago.

A particularly determined and devoted man, Edwin shadowed bird tours for years before he mastered enough English and studied enough biology to start leading tours himself. Most people would have given up when presented with the overwhelming amount of information the staff guides are expected to provide to guests. But not Edwin; he marched on. Danilo was another success story. With his background in marine biology, he ended up in charge of training new guides who were brought on.

This worked really well, resulting in a succession of fantastic guides. But last year Lapa Rios decided to take things a step further and tap the cumulative knowledge of the lodge’s four expert guides. And so, under Danilo’s supervision, the guides school was born. The school’s main objective is to initiate as many people as possible into the basic concepts of guiding and biology, and by doing so to raise the overall standards of tour quality in the area. The idea is also to create a list of prospective guides for when a need arises.

In late 2016 the lodge started a four-month pilot project that involved three of the staff members taking intensive classes taught by Danilo. All the three students/staff were seriously interested in the one vacancy the lodge had at the time. The program was such a smashing success that it was difficult to decide which finalist would actually get the position.

As a result of this pilot project, Lapa Rios Lodge is now gathering documentation and putting together material for the official launch of the guides school, which is slated to become one of Costa Rica’s best training programs for naturalist guides.